President Erdogan announces that Turkish flag hoisted in the center of the Kurdish-dominated Syrian city of Afrin. 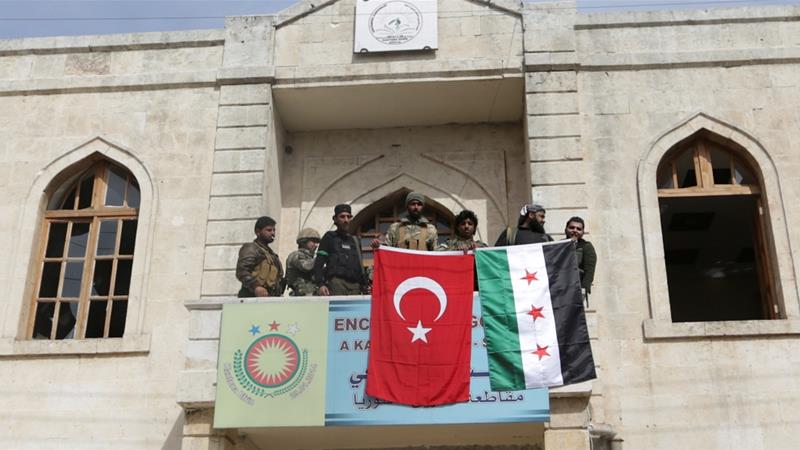 Turkish forces and Free Syrian Army (FSA) rebels captured the center of Afrin in northwest Syria after Kurdish fighters who were in control evacuated the city in order to fight another day.

Turkey’s military said in a tweet on Sunday that troops were searching for landmines and other explosive devices in the area.

“Many of the terrorists had turned tail and run away already,” President Recep Tayyip Erdogan said in a speech in western Turkey.

He announced that Turkey-backed forces took complete control of the city center at the 8:30am local time (05:00 GMT). He said 3,603 “terrorists had been neutralized” in Afrin since the launch of the cross-border operation on January 20.

Erdogan said the Turkish flag and the flag of the Syrian opposition fighters were raised in the city, previously controlled by the Kurdish militia known as the People’s Protection Units, or YPG.

Later on Sunday, limited fighting was reported in some pockets in Afrin.

“Our special forces and members of the Free Syrian Army are cleaning the remains and the traps they left behind,” Erdogan said. “In the center of Afrin, symbols of trust and stability are waving instead of rags of terrorists.”

Footage by Turkey’s private Dogan news agency showed Syrian fighters shooting in the air in celebration. In another Dogan video, a Syrian fighter is seen shooting at a statue of Kurdish hero Kawa, a symbol of resistance against oppressors, before a bulldozer pulled it down.

Turkey – together with the FSA – launched the military operation into Afrin in the northwest of Syria to vanquish the US-backed YPG fighters near its border.

Free Syrian Army spokesman Mohammad al-Hamadeen said Kurdish forces pulled back to Syrian government-controlled areas around the city of Aleppo, or to the Kurdish-held region east of the Euphrates River.

“Maybe [Afrin] will be cleared by the end of the day – it’s empty of fighters, they cleared out,” Hamadeen told Reuters news agency.

Afrin’s leaders said on Sunday that Kurdish-dominated forces will shift from direct confrontation to guerrilla tactics.

“Our forces are present all over Afrin’s geography. These forces will strike the positions of the Turkish enemy and its mercenaries at every opportunity,” Othman Sheikh Issa, co-chair of the Afrin executive council, said in a televised statement.

“Our forces all over Afrin will become a constant nightmare for them.”

Other videos and photos shared by the Turkish-backed FSA fighters on social media showed them in residential streets, making victory signs and waving flags.

Turkey’s government spokesman Bekir Bozdag said the military campaign would continue to secure areas around Afrin and make sure food and medicine were available.

Tanushree Dutta returned to India after a long time

Is Physical Relationship a Competition?

10 Things you do on internet which is totally illegal

Philippines is in HIV crisis

What does your religion say about women’s menstruation

Why rice is offered to God in Jain temple?

Tricks to being Apart from Ghost and Ghost Spirits

What is the punishment for rape according to Hinduism?

Tanushree Dutta returned to India after a long time

21 Popular Indian celebrities who have birthday in April

Why Brahmaputra river gets red once in a year ?

This dirtiest station has set a world record in the country-...

ABOUT US
Nukkad Talks is your news, entertainment, music fashion website. We provide you with the latest breaking news and videos straight from the entertainment industry.
Contact us: support@nukkadtalks.com
FOLLOW US
© Powered By Web Optimisation
MORE STORIES

Rise in the price of Petrol and Diesel again